“DFACS would send toys to foster homes over Christmas. I would buy one or two and she would let me keep them in my room. And then she broke them in front of me or buried them in the garden by the river.

Memories like this are the origin of Rob Forbes’ ‘Childish Things’ show; Explorations of the Inner Child” opens this Saturday at the RO3 Gallery on Montgomery St.

I’ve written before about my respect for Stephanie Forbes, owner and director of one of Savannah’s newest and most exciting art spaces. My affection and respect deepen when I meet her to discuss this powerful exhibition of her father’s work… A conceptual exhibition comprised of over 500 toys, sculptures, installation pieces, small panels and photographs.

Based in Augusta, Rob Forbes owns and operates his own studio and business, Moving Canvas Media, a full-service production company specializing in original creative concepts, video, film and photography content for television and the web.

Rob Forbes in his Augusta studio.

It seems fitting that Rob’s first solo exhibition coincides with Saturday’s SCAD Sidewalk Art Festival, the first since the pandemic, and Stephanie is looking forward to hosting her parents’ college friends and SCAD alumni.

She particularly hopes that her three college roommates will be able to make the trip. Tangentially, she tells me the crazy story of how, as an associate of the SCAD alumni workshop, she was given a flat and studio at Forsyth House on Barnard St.

His mum and dad came to see him last year, and incredibly, it was Rob’s first-ever apartment that he shared with his three housemates. Pure kismet.

Stéphanie says: “My father has been an artist for a long time. Originally, he made tight and perfected graphite works and illustrations, but eventually began to create childish, playful and colorful collages and paintings. I never knew why. I didn’t know the root of his trauma until we started talking about my own issues about six years ago. Now Dad is finally stepping away from that happy, childish work and creating from an adult perspective. The divine blessing of being an artist is that ultimately we have to do these things.

The trauma she is referring to is Rob’s childhood in the foster care system of the 60s and 70s.

Taken from his mother at the age of one, he and his siblings were separated and placed in numerous foster families until the age of seven, when he was placed under the care of permanent custody of adoptive parents on Saint-Simon Island. It was an abusive environment.

Here’s another heartbreaking memory: “She would walk us around and pick up all the neighbours’ trash. She carried away all the debris to mulch her garden. One day while we were doing this, I found a half-inflated basketball and it was one of the only things I had to play with. I used an old 55 gallon drum in the garden as a sort of hoop. It went on for years… All the adopted children who came and went from this house also played with it. They probably remember it. 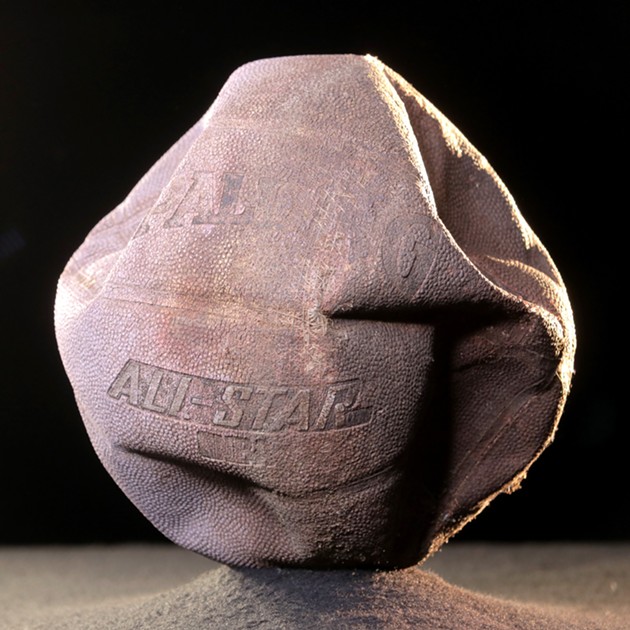 During our FaceTime session with Rob, he told me, “When you’re in the foster care system and you have toys and they move you, things get lost. I don’t really remember any particular toys – just that my sister had Barbie dolls and a Mrs. Beasley doll. After I was seven, I got toys from DFACS at Christmas, but the house I was in, if you got in trouble and they took your toy, it was gone forever. It didn’t take a week to punish you. It was taken forever.

For many years, this lack of childhood translated into a compulsion to collect.

Rob says, “I don’t buy new toys. The new toys don’t have a story yet. I love toys that have a habit of bringing joy and love to those who have owned them, even if it was short-lived. That’s why I go to estate sales every weekend with my wife.

Rob recently posted a message on Facebook asking his friends for more toys as the deadline to finish work on this exhibit drew near. By chance, a friend of his brought a big trash bag filled with ten different basketballs.

Stephanie explains her father’s compulsion to collect this way: “It started as a way to compensate for what he felt was a lack of innocence allowed to his younger self: a process to restore underprivileged youth and honor the process of artistic creation that allows us to tell stories and heal.

She talks about him micro-dosing his memories… Accepting things he never talked about. She sees “Childish Things” as offering “a lens on a current, activated healing process” while “highlighting the dark side of the foster care system of the 60s and 70s… an unheard-of child and a journey to healing. an abuse and narrow. youth because each piece is a story that honors a specific and transformative moment in the artists’ journey towards overcoming.

Rob tells me, “I guess this show has been brewing for 50 years. It sort of happened organically but I can assure you that if Stephanie hadn’t pushed me, it wouldn’t have happened so fast! This work has been in my head for years, but I never had the resources, the structure and the motivation to do it. He says creating the pieces has been therapeutic, “and very exciting, because I love what I’ve done.” 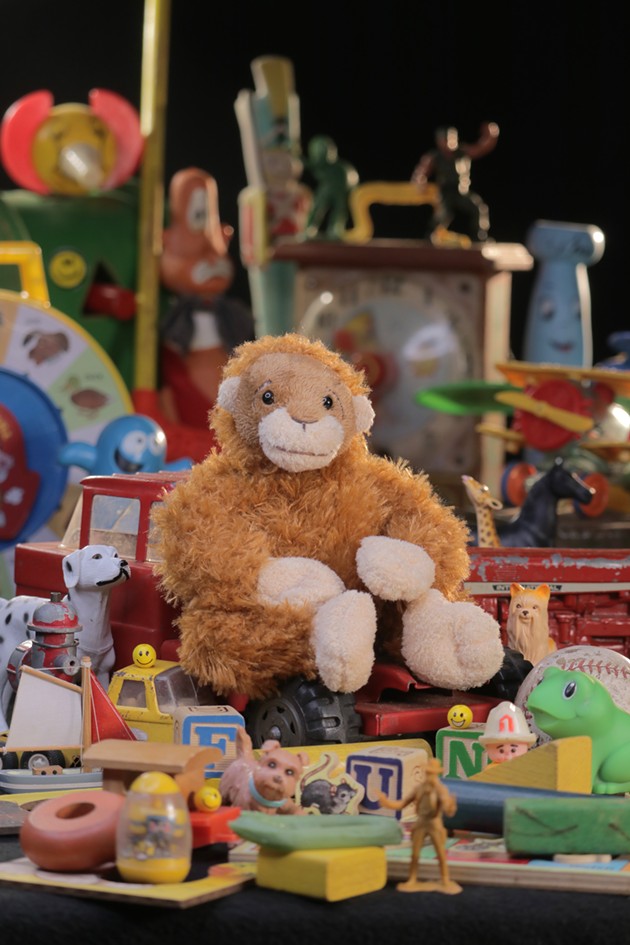 Describing himself as an “extremely private person”, he clearly fears the opening reception will be difficult for him. “People are going to wonder and it’s probably going to bring a lot of emotion to me. I had things in my head that were very dark, but I chose not to. The memories are dark but the he experience of making this work has been truly brilliant.

After finishing the FaceTime session with her dad, Stephanie tells me about growing up in a house where the guest bedroom had been turned into a showroom for her Hot Wheels collection.

“He had thousands of them in display cases. It was his obsession. But that changed when he began to realize that it was because he wasn’t allowed to have toys as a child. She continues: “This exhibition is very intense. He’s almost 60 years old and he’s just beginning this kind of work and this kind of consideration as an artist and creator. I’m excited for him. There is tension in what he is doing now. I think that’s what it’s supposed to do. There are so many scarred adults… Dad never talked about it until six years ago. It is important work.

A food truck will be on site. The exhibition runs until May 26. His work can be seen on Instagram @RForbes_Art

Learn more at RO3.com. And follow Stéphanie who begins her second stint as an associate of the SCAD workshop. Over the next three months, she will create “Mema in the Magnolia” honoring the rich memories of her mother’s mother.