Peter Roberts, the magician behind the endless stream of brilliantly executed art exhibits at Savannah’s Location Gallery, is a blacksmith par excellence.

In fact, at last February’s inaugural exhibition in the gallery’s new space (at the bustling corner of Liberty and Bull streets), Roberts showed off his usual wit and humor with his solo show “Pundred.”

He had painstakingly created a hundred finely cut visual representations of a hundred puns.

It is often this love of words that is at the origin of the art exhibitions he organizes with such professionalism. This Friday’s “HYPE” show is no exception. The concept of HYPE was born from the idea of ​​considering what constitutes art.

Roberts thinks all artists are annoyed when someone considers a framed poster of a popular saying or meme to be art. Especially when the same investment could buy an original painting or sculpture.

He considers memes such as “Do the right thing”, Hang on, baby, “There’s no me in teamwork” and “Just Do It” as particularly sickening and “gritty”. . However, there have been other sayings like “Don’t tread on me”, “Keep calm and carry on” or “We can do this” which are more enduring and universal.

To flex the perception of value, Roberts asked participating artists to reinterpret these sayings and memes, and make art directly inspired by them.

The only requirement was that the text could not be used in the artwork and whatever saying that motivated the art is the title of the piece.

“It gives viewers a ‘wobble’ between the art seen and the title read. In this oscillating space, the connection of ‘This is art’ is engaged,” explains Roberts. “It’s definitely going to be our most experiential show of the year and that’s why I think it’s important.”

As always, the show will benefit a local non-profit organization. It seems so appropriate and appropriate in this midterm election year filled with hype from politicians and propaganda from warring parties, that proceeds go to the League of Women Voters of Coastal Georgia.

This grassroots, nonpartisan organization works to protest and expand voting rights while defending democracy through advocacy, education, and litigation at the local, state, and national levels. Roberts considered the League’s work and how “…they kind of turned the hype around.” They ask candidates about politics in an open forum. I think it’s so important that people know about the candidates, their platforms and what they stand for.

Roberts holds a BFA in Video Production from SCAD and has turned his love of storytelling into a career in television production. He later moved into the ad sales side, becoming an expert in ad creation, media buying, ad campaigns, branding, graphic design and messaging. Eventually founding his own agency focused on packaging and corporate branding, Roberts received several Graphic Design USA awards. Of his relationship with real estate agent Austin Hill, he says, “I had done graphic work for Austin, and he came to one of my solo art shows and said he was moving his real estate office in Whitaker and wanted to put a gallery in it. He asked, ‘Do you want to execute him?’ He had seen my work at art auctions for local organizations like the Telfair Foundation and Historic Savannah and seen how I raised funds while paying the artists. His idea was to have a gallery that would raise funds for non-profit organizations. And so, that’s what we did.

Location Gallery opened in 2016 in Hill’s former offices in the Design District on Whitaker Street.

“There was such a need to show local artists because there aren’t many avenues for them. It’s a way to help them put money in their pockets and support what they do creatively. As mentioned above, the Hill’s business and Location Gallery have since moved to a larger space on Bull and Liberty Streets following a merger with Three Oaks Realty and subsequent affiliation with Corcoran.

Alongside his duties as venue manager, Roberts maintains a successful solo art practice. Best known for his “Headcases” series of cut-out artworks inspired by geography and pop culture, his lightweight rows of small, stylized portraits are available in the Jepson Center for the Arts gift shop and have led to solo exhibitions in Oklahoma City, the Florida Keys and New York. Roberts meticulously cuts out images on monochrome paper often with a shiny metallic surface. He tells me that he obviously knows how to paint and draw, but that “there is a finality to the cutting. When it’s done, it’s done. »

The future looks busier than ever for this energizing bunny of an art promoter.

“I’m getting ready to be part of a group show in St. Petersburg, Florida,” says Roberts, as he has exhibitions planned at the Gallery through the end of the year. 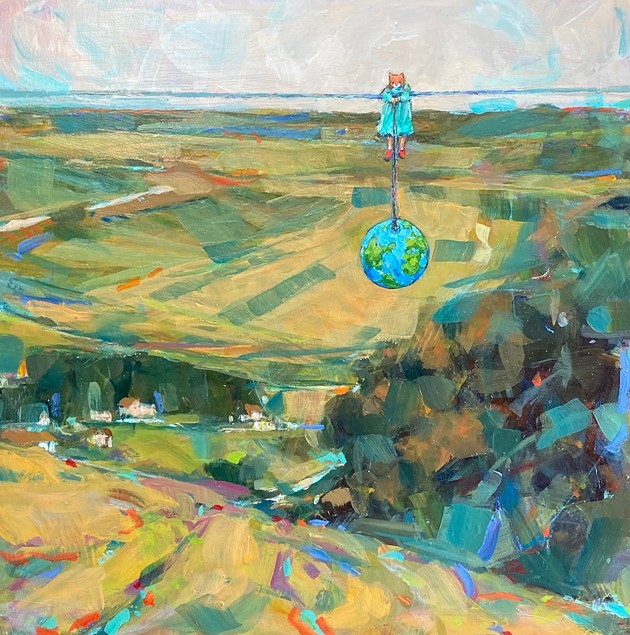 “Hang In There Baby” by Stacie Jean Albano, acrylic

Look for Jennifer Nolan’s solo show next month, then the annual Hospice Savannah Summer Nights fundraiser that I’ve had the pleasure of collaborating with him on in previous years. “We’ll have multiple performers and we’ll be holding it next door (in Soho South on Liberty) on August 25. This year it’s benefiting the Pediatric Hospice Butterfly Program.” He continues: “We will do a large collective exhibition in October for the month of Gay Pride. And of course, I will close the year with the holiday show ‘$300 And Under’ which will again support WRUU.

Stay tuned for the themes of the shows…the fun for smith Roberts is to tie the artwork to the nonprofit in some way….

“I think it gives more strength to the show, because then there’s something the artist, the non-profit organization and the patron can talk about. Light coaching is fine, but there have been times when I’ve made artists feel like they’re back in school and given a mission,” he laughs. -he. “I had to learn to make the parameters a little broader, a little looser, not so specific. Sometimes I think too much.

HYPE by Various Artists, opens Friday, June 3 from 6-8 p.m. at Location Gallery @ Corcoran Austin Hill Realty, 251 Bull Street. Proceeds from the gallery were donated to the League of Women Voters of Coastal Georgia. Learn more at LocationGallery.net or Instagram @LocationGallery