Like Father Sieyès explaining what he did during the Terror that followed the French Revolution – “I survived” – art went through 2020: struggling, disrupted, reconfigured and resilient.

For months, the most beautiful images in the world have remained invisible. The ruthless goddess, the limpid nymphs and the cursed hunter performed through the paintings of “Diana” in an obscure silence at the monument of the National Gallery Titian show, closed in March a week after the start of its run, reopened, closed again, reopened once more in July, November, December.

A decade in the making, the revealer Van Eyck: an optical revolution at the Museum of Fine Arts in Ghent was only exhibited for 41 days. But his sensual angel with red wings, who has just landed from heaven on the altarpiece of Saint Bavo, his strangely naturalistic saints and his Flemish bourgeois, still burn like consoling memories.

Van Eyck just won the Apollo Exhibition of the Year award, beating an excellent shortlist – the fiery London Mugwort and that of the Louvre Leonardo. After the pandemic, if collapsing museum budgets make successful shows scarce and global cultural travel never recovers, then 2020 was swansong: Raphael in Rome, Matisse in Paris, Monet in Berlin, El Greco in Chicago.

Closed museums told us what we lacked, canceled fairs told us what we didn’t have. And for better or for worse, art has reflected the economic and social change brought about by Covid. The gaps between the summit and the rest widened: £ 13.9million for Peter Doig’s magnificent ‘Boiler House’ in solitary forest style at Christie’s in October, but 95% of performers reported a drop of their income. Many have not sold anything all year.

Art, like people, has stayed at home. A rare biennial, the dream of Riga And suddenly everything blossoms, has proven that the local can be universal and convincing. In Lina Lapelyte and Mantas Petraitis’ “Currents”, 2,000 pine trunks floated on the Daugava river, a “raft highway”, harmony between man and nature. Augustus Serapinas’ soil / hay installation “Mudmen” – supposedly snowmen, but the snow never fell – were climate change sirens crossing references to Monet’s haystacks with the faceless peasants by Malevich.

Although the art moved in line with the rest of life, it quickly faded there. Everything has started to look the same – and seeing an exhibition is, after all, a social pleasure. In the absence of physical engagement with objects, the real movement was conceptual: art became more than ever linked to ideas, information and politics – which, unlike paintings, travel virtually. It reinforced what would have happened anyway: As Covid-19 plunged museums into economic crisis, the momentum generated by the protests of the Black Lives Matter movement forced something deeper: a moral crisis, apparent at several key moments after reopening in summer and fall.

In August, the British Museum placed the bust of its slave-owner founder Hans Sloane in a closet in its so-called “Gallery of Lights”, contextualizing imperialism and slavery. Director Hartwig Fischer said: “We pushed him off the pedestal where no one was looking at him and put him in the spotlight” – where the museum scrutinizes itself and its past.

In September, the Tate, along with partner US museums, postponed its 2021 retrospective of mid-20th-century white Jewish painter Philip Guston until 2024. Guston’s use of Ku Klux Klan imagery confronted the banality of evil, the complicity of racism. “In America today, because Guston appropriated images of black trauma, the show has to be more than Guston,” said Kaywin Feldman, director of the National Gallery in Washington. “We weren’t prepared for this. . . An exhibition with such a strong commentary on race cannot be achieved by all white conservatives. Tate curator Mark Godfrey, speaking against the ruling – “extremely condescending to viewers, who are believed to be unable to appreciate the nuances and politics of Guston’s works” – has been suspended.

In November, the musée du quai Branly in Paris was forced by a decision of the French Senate to return to Benin 26 sculptures looted a century ago. “It’s a question of justice. . . the establishment of a new relational ethic ”, declared Bénédicte Savoy, professor in Paris appointed alongside the Senegalese economist Felwine Sarr by President Emmanuel Macron to report on the restitution during the colonial era.

Even before colonial statues were overthrown, European public institutions were challenging cultural memory. The Rijksmuseum in Amsterdam, famous for Rembrandt, had already programmed Slavery as the main program of 2021; Tate had planned next year Great Britain and the Caribbean. Now, anxious to diversify their lists, commercial galleries are also looking for black names. Hauser & Wirth has just completed its already diverse list by signing the black abstract painter Frank Bowling. 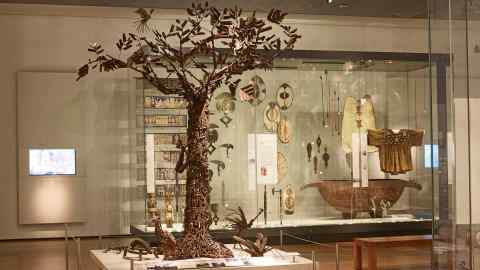 The gloomy market conditions – art revenues down 36% by mid-year, according to Art Basel / UBS survey – did not deter Accra’s Gallery 1957 from opening its premises in London this winter, with an exhibition of charismatically elegant character paintings by a 26-year-old Ghanaian. Kwesi Botchway. These are chromatically stunning – purple like the new black, with its connotations of privilege; bright, piercing, powerful orange eyes; Impressionistic bursts of dark, smooth skin against soft mint fur in “Green Fluffy Coat”.

Botchway is one of the most exciting painters emerging, which is perhaps due to the fact that he is not only prodigiously talented, but has something to say. Curator Eskow Eshun titled the gallery exhibition 1957 Becoming as good as being, claiming that the paintings deal “with how we understand darkness not as a fixed proposition, but as a way to navigate the world.” The title comes from Stuart Hall’s 1996 essay “Cultural Identity and Diaspora”. Because portraying black lives brings political advantage to painting, a fascinating aspect of museums’ rush to present black artists is that they legitimize a medium, figurative painting, in institutions that have long been conceptualist hotbeds. .

A magnificent painting of flowers is currently on display at the Serpentine Gallery in London. Entitled “Say Her Name”, it commemorates the death in custody of Sandra Bland and is painted by 36-year-old African American Jennifer Packer. La Serpentine is organizing its first European museum exhibition. “Remain, Thriving” by Njideka Akunyili Crosby, the original Brixton tube station mural showing a black British family watching the Windrush scandal unfold, has just entered Tate’s collection.

A new history painting is emerging from the urgency of narratives of trauma, injustice and exclusion. The Image of the Year in painting, on display at the Petzel Gallery in New York, is Derek Fordjour’s sumptuous “The Pall Bearers”: six black men in mulberry suits, glamorous but downcast and vulnerable, descend the image with a gold coffin reminiscent of George Floyd’s.

ArtReview is an insider magazine, generally tangential to this other traditional medium of Old Masters exhibitions – but the 2020 painting declares an influence that will shape the way art is shown and read everywhere over the next decade, as the racial balance in collections and institutionally is corrected. Opened last week, the National Gallery’s latest exhibition of 2020 is a herald of change within the Sacred Renaissance Fellowship. It focuses on “The Adoration of the Kings” by Jan Gossaert (1510), an ornamental painting packed with figures, animals, textiles, all animated by the dynamic positioning and gesture of the black king clad in gold. Balthazar – his name inscribed on his jeweled headdress – emerges, nervously but with commitment, from the ruined buildings of the old dispensation, into a new world, uncertain but full of hope.